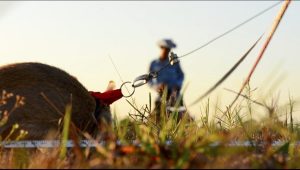 Please click here to join the virtual meeting. No prior registration required.

My fieldwork confronted me with two technologies- bombs and rats. Both were integral to understanding relations in the aftermath of war—that, in fact, these relations were transformed not only by the humans but by the nonhumans who actively disarmed the land, namely, landmine detection rats. Fears of militarism became disrupted when a rat came into the minefield. The rat itself provoked feelings of love between human deminers. The rat, as landmine detection technology and a being, helped to alter feelings of war that the bombs perpetuated. I soon began to realize that this had implications for how trauma and healing, ecological relations, and transitional justice, all of which I found to be entangled.

Part of the Social Justice in Southeast Asia (SJSEA) Project faculty search in Anthropology/International Studies. This event is free and open to the public.