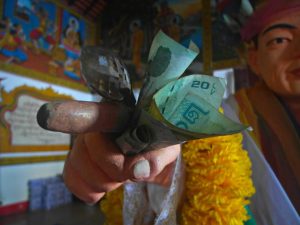 Thep Thanchai means a responsive god who grants a wish quickly. The title specifically refers to Bo Bo Gyi, the Burmese guardian god, the protector of the Buddha’s relics, whose shrine in Yangon has been the highlight among the sacred sites in the tour package for the Thai tourists. This paper traces the emergence of the cult of Thep Thanchai and its connection with Thai current religious climate. The rise of Thep Thanchai not only marked the dramatic change of Thai pilgrimage tourism to Myanmar but also revealed the role of the informal Thai-Burmese sangha linkage and the Burmese migrant communities in Thailand in facilitating the trans-border tourism and the transference of Burmese Buddhism to Thailand.

The cult of Thep Thanchai popularizes the sense of punctuality in propitiation. After the boom of Thep Thanchai in Myanmar, many replicas of the god were enshrined in Thai temples while other Buddhist cults adopted the discourse of speed to attract clients. Thep Thanchai cult responded to the increase of everyday life pace driven by politico-economic constraints and precarity of late modernity while accelerating the demand for magical speed, reflecting the current trend of Thai practical Buddhism in which instantaneity and efficiency have become part of the Thai spiritual consumption.