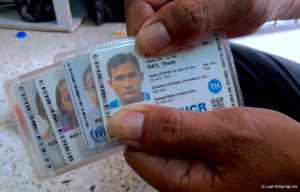 In recent decades, the rising number of urban forcibly displaced persons—people who have left their country of origin due to fear of persecution to seek refuge in another country’s urban settings—has become a pressing global phenomenon. Thailand hosts a significant number of these populations; as one of a handful of countries in the global south considered a safe ‘transit country,’ this study investigates how the regime governing urban forcibly displaced persons in Thailand has emerged and developed. I argue that Thailand’s regime governing urban forcibly displaced persons grew out of the legacy of the Thai forced migration management during the Cold War, based on a principle of “balancing security and humanitarianism”—framing of forced migration as a national security issue, but also acknowledging the international pressure on Thailand to provide humanitarian assistance for forcibly displaced persons. The attempt to strike a balance between both principles has produced an unspoken dual-track management system for those seeking asylum in Thailand’s urban areas, which allows the Royal Thai Government to speak a humanitarian language while pursuing measures that aim at safeguarding Thailand’s national security interests.