Choose Your Own Adventure: Thematic Tourism and Symbolic Economy in Cambodia’s ‘Charming City’ 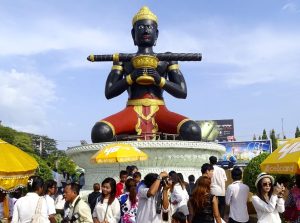 Over the past two decades, international tourist visitation to Cambodia has grown more than 2,200%.  Cambodians are also traveling within their own country much more frequently, creating new forms of domestic tourism that influence regional development.  While the nation continues to struggle with the consequences of such rapid expansion, the growing number of tourists also provides opportunities for smaller urban spaces to compete with Cambodia’s larger cities through the creation of region-specific tourism industries.  Such is the case in the northwestern provincial capital of Battambang City, where local residents and their provincial government are attempting to establish a ‘symbolic economy’ based on thematic tourism that can tempt tourists away from well-trod tourist attractions found elsewhere in favor of regional offerings.  In this talk, I detail how Battambang uses thematic tourism and “Disneyization” to reflect the new goal of becoming Cambodia’s “Charming City”.  In so doing, Battambang City is better able to compete with larger cities like the national capital of Phnom Penh for tourist income while also promoting narratives about regional history and identity that challenge the nationalist discourse asserted by the central Cambodian government.