The Military and Monastic Order in Modern Thailand 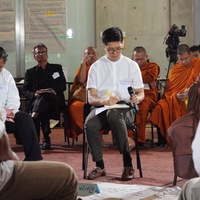 In the Buddhist kingdom of Thailand, the monastic order is under attack. After the 2014 coup, the junta has intervened in the monastic affairs through a series of increasingly coercive measures, including  adverse amendments of the sangha law, obstruction of the Supreme Patriarch nomination, siege of an immensely popular temple, and finally the forced disrobing of senior ecclesiastic monks. These developments surprise many because the sangha is considered as part of the status quo and has historically served the central authority in security matters, particularly the anti-insurgency campaign during the Cold War. This presentation consists of two parts: the first explores the rationale behind this shift and argues that principal to the current state intervention is the unease with respect to the growth of the sangha as a powerful economic and political institution, despite its diminished importance to national security. Coupled with its culturally privileged status and increasing affinity with civilian political groups, the sangha becomes a liability in the eyes of the junta. The second part of the presentation looks at how the military government has proceeded with monastic intervention and discusses the repercussions from the fall out.