How did Angkor become Angkor? Conceptualizing the rise of the Khmer Empire (9th to 15th c. CE), Cambodia 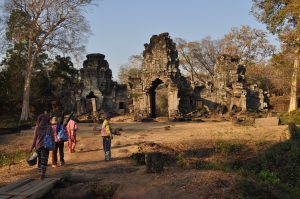 The question of how the Khmer Empire became the most influential polity in medieval mainland Southeast Asia has been largely unaddressed in over 100 years of research. Recent work by the Industries of Angkor Project (INDAP) has sought to fill this gap via an intensive, multidisciplinary investigation of the material and social factors that enabled Angkor to become the largest settlement in the premodern era. INDAP’s focus is on the transformative role of iron – or specifically steel – for enhancing temple construction, agricultural output and military success. This presentation highlights current field and laboratory research around Phnom Dek, the literal “Iron Mountain” 100km east of Angkor, and will focus on the scalar interplay between landscapes, furnace organization, producers, and ‘steely’ places in the metal itself. Based on our current findings we argue that industrial level manufacture of iron was one of the most significant factors in the rise of Angkor and can begin evaluating whether Khmer or ethnic minority groups were responsible for its production.