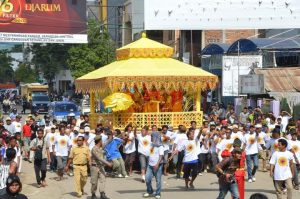 Being Muslim in Indonesia: The Local Conception of Islam and Every-day-experience of Muslims in Bima, Eastern Indonesia

Please click here to join the virtual meeting. No prior registration required; email seasia@seasia.wisc.edu with any access issues.

This talk is primarily based on my study being part of, and funded, by the project entitled the Australian Research Council Discovery Project grant DP00881464 “Being Muslim in Eastern Indonesia: Practice, Politics and Cultural Diversity,” with Kathryn Robinson and Andrew McWilliam as primary investigators. This project analyzes the conversion to Islam in eastern Indonesia that is critically linked to the rise of Islamic sultanates among the major Indonesian maritime groups—Bugis, Makasarese, Butonese— and the Malukan islands of Tidore and Ternate, associated with powerful regional trading networks and the opportunistic exploitation of natural resources (Andaya, 1993). As a result, the historical conversion has fostered a lively diversity of local forms of Islam. This presentation, in particular, will shed a light on a critical feature of the contemporary experience of Islam in Bima of Sumbawa island, by describing the widespread influence of Bugis, Butonese and Makassarese in shaping the local conception of Islam among Bima Muslims. Through ethnographic field study from 2011 through 2012, and returning in 2018 and 2019 intermittently, this presentation investigates local beliefs and practices and understands the specificity of the local settings. I asked what Muslim identity means to the Muslims in Bima? How do their practices of daily life reflect their commitment to indigenous cultural traditions and to Islam, as a religious, cultural and political force? What role do Islamic organizations (e.g., NU and Muhammadiyah) play in their lives? Does the everyday experience of ‘being Muslim’ in eastern Indonesia include engagement with national forms of political Islam and if so, how is it embraced? Data from the field study serve as the basis for a comparative ethnographic analysis of religious diversity and change among Muslims in Indonesia.

Muhammad Adlin Sila is working at Indonesia’s Ministry of Religious Affairs (MORA) and lecturer at UIN Syarif Hidayatullah, Jakarta. He finished his doctoral programme from the Anthropology Department, the School of Culture, History and Language (SCHL), ANU College of Asia and the Pacific. Sila’s main research is on Islamic studies, social sciences, and social anthropology. He has published books and journal articles in Studia Islamika, Al-Jami’ah, Indonesia and the Malay World, the Asia Pacific Journal of Anthropology (TAPJA), ANU Press, NUS Press, ISEAS – Yusof Ishak Institute, and Bijdragen tot de taal-, land-en volkenkunde/Journal of the Humanities and Social Sciences of Southeast Asia.