CSEAS/UW-Madison alumni (from left to right) Boonlert Wisetpreecha, Prachak Kongkirati, and Yukti Mukdawichit (Thammasat University) call for the release of activists detained over the lese majeste law in Thailand.

After retirement in 2016, Thongchai Winichakul went to Japan for three years (2017-2019) as a Senior Researcher at the Institute of Developing Economies (IDE-JETRO), one of the country’s major research institutions in area studies. Since retirement, he has published four books and several articles in Thai and a new book in 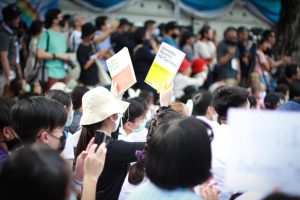 English, Moments of Silence: The Unforgetting of the October 6, 1976, Massacre in Bangkok (University of Hawai`i Press, 2020). The book explores the changing memories and the conditions for silence over the four decades after the tragedy. Dr. Winichakul also began a new project examining the intellectual foundation of Thailand’s jurisprudence from the nineteenth century to the present. In March 2020, he delivered an address on the subject at the Puey Ungphakorn Memorial Lecture, one of the most prestigious academic events in the country. As usual, he also contributes commentary on political and social issues in Thailand. A few of his earlier publications in Thai appeared at the demonstrations of the youth movement in 2020 that called for the reform of the monarchy (see picture above), leading to an examination of one of them by the police.