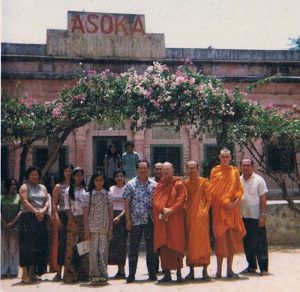 Dharmawara Mahathera (1889-1999) was a colorful Cambodian monk resident in India from the mid-1930s until the mid-1970s an the United States from then until his death. I have previously written about a period in the 1950s when he was in regular contact with Norodom Sihanouk and played a role in Sihanouk’s emerging relation to India following Cambodian independence—with relevance for the way a stance of neutrality was negotiated in cultural terms in the context of the Cold War. This talk, while summarizing some of these same things, will shift the focus to other aspects of his career as a monk, healer, and teacher: his time in Siam and Burma before going to India, the life at his temple near Delhi, and the contacts with young Westerners which led him to go to Great Britain and the U.S.