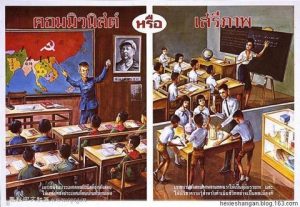 “National Policies, Economic Realities, and the Shifting Acceptance of Mandarin and Chinese Dialects in Thailand”

Language is an essential component in maintaining identity. Individuals and families make choices in languages spoken at home; however, sovereign states enact nationalistic policies to either foster a common tongue or eliminate languages deemed undesirable, particularly through schools. These policies, as rhetorical tools rationalizing the acquisition and suppression of Thai and Chinese languages, led to clashes between the desired national languages and dialects among Thai Chinese families in Thailand. This presentation highlights the shifting acceptance of Mandarin taught in schools and Chinese dialects used at home before, during, and after Phibun’s suppressive Thaification policies. At the same time, it connects national and international politics on language education and changing economic realities to the literacy and language of Thai Chinese families across generations.