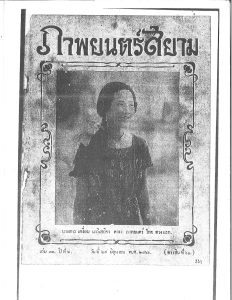 Miss Suwanna of Siam (1923), putatively the “first” international co-production in the history of Thai cinema—a partnership of a Hollywood team and local talent—was meant to promote film diplomacy and introduce modern Thailand to the world. This film generated intense excitement among the Thai population about filmmaking and the potential of a national film industry, and yet, we have no record of a US screening. The complete disappearance of this film and dozens of other Thai films from this era makes it impossible for the following generations to engage textually with the early days of Thai cinema. However, this unfortunate absence of the film paradoxically presents an opportunity to examine its reception and what the contrasting responses of the Thai public and the Royalist elites tell us about the status of the moving image in the nation’s emerging modern media infrastructure. I compare the public’s enthusiastic embrace of the film following two-weeks of free screenings in Bangkok to the government’s anxieties about the film’s politics of representation and their concomitant appeal to American producers to ban the film from being screened in the US. Focusing on the ambivalent exchanges—both amicable and wary—between the Thai government and the Hollywood team, this talk will trace the emergence of a “double vision” that structures the very foundation of a national cinema and will show how, under conditions of coloniality, film diplomacy is a tricky business requiring careful management and censorship.