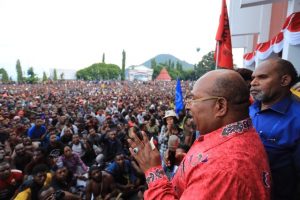 This presentation examines the reemergence of pig feasts, a Melanesian institution of ceremonial exchange, in Indonesia-occupied West Papua in the context of the introduction of a special autonomy and direct local elections (Pilkada) to the region after the 1998 Indonesian democratic reforms. Whereas in other Melanesian societies pig feasts have been declining due to the incursion of Christianity and the modern economy, in West Papua pig feasts have been mobilized by indigenous politicians, especially during the elections as elections become a new site of competitive exchange .The intensification and increasing scale of pig feasts show how both the traditional institution of pig feasts and the modern institution of elections have become a platform for the contestation of Indonesian democracy and Papuan autonomy. Anthropological attention to traditional institutions, such as pig feasts, can offer an important insight into this plural political order, and tell us how Indigenous peoples have negotiated the terms of democratic reforms and their incorporation into the state through their own institution of ceremonial exchange.