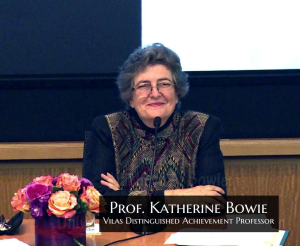 Katherine Bowie, former CSEAS Director and Vilas Distinguished Achievement Professor, is completing her fourth and final year of leadership for the Association for Asian Studies (AAS), serving as President in 2017 and as a critical member of the AAS Board of Directors. In completing this service, she is following in the footsteps of Dr. Thongchai Winichakul, another distinguished UW-Madison scholar and former AAS president. Founded in 1941, AAS is an international organization of some 7,000 members worldwide. During her year as President, she sought to strengthen relations between the regional councils and made efforts to promote distance language instruction in Less-Commonly-Taught-Languages (LCTLs). Working with the Luce Foundation and UW’s own WISLI, AAS now hosts a website providing information about such LCTL-learning opportunities. She devoted her presidential panel to highlighting the importance of language instruction and announcing this website; the panel was titled, “Expanding Language Instruction on Your Campus: New Possibilities through Distance,” and included UW’s Lauren Rosen, Ellen Rafferty and Felecia Lucht.

With her leadership of AAS during this critical period drawing to a close, the Center for Southeast Asian Studies is excited to have Professor Bowie return to full-time focus on our programs at UW-Madison while continuing to provide invaluable mentorship to her many students.