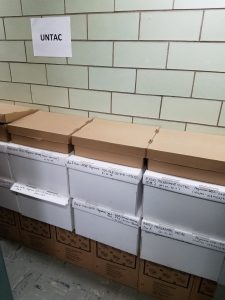 As part of a larger award to CORMOSEA (Committee on Research Materials on Southeast Asia), the Henry Luce Foundation is supporting the University of Wisconsin-Madison Libraries to digitize the UNTAC (United Nations Transitional Authority in Cambodia) Radio Archive’s entire collection of paper transcripts. Adding this component to the existing audio sample in UW’s special SEAiT (Southeast Asian Images & Texts) project will provide open access to this unique resource for researchers and scholars around the world. Southeast Asian & Hmong Studies Bibliographer Larry Ashmun will oversee the project.

The UNTAC (United Nations Transitional Authority in Cambodia) Radio Archive is a unique collection, one which can be considered a Cambodian historical resource.  The collection features the democratic transition in Cambodia in the early 1990s, shortly after the end of the Cold War.  The UN-organized radio program was established in October 1992, began broadcasting on 9 November 1992, and ended on 22 September 1993 just prior to the country’s first democratic election in several decades.  Radio was a very effective tool for UNTAC to disseminate information on the electoral process, human rights, and other UNTAC activities to the Cambodian people across the country.  The collection consists of about 232 programs comprising 2,462 paper documents and 2,113 distinct audio tapes.  The program transcripts and other text-based documents are in English, Khmer or/and French, while the tapes are in Khmer except for some interviews with non-Khmer speakers.

UNTAC was established by UN Security Council Resolution 745 (1992).  It was created “to ensure implementation of the Agreements on the Comprehensive Political Settlement of the Cambodia Conflict, signed in Paris on 23 October 1991. The mandate included aspects relating to human rights, the organization and conduct of elections, military arrangements, civil administration, maintenance of law and order, repatriation and resettlement of refugees and displaced persons and rehabilitation of Cambodian infrastructure.”  It began operation on 15 March 1992 and ended in September 1993.

The Archive at the University of Wisconsin-Madison Libraries

The UW Libraries were given the original UNTAC Radio Archive materials outright in 1993, as noted in correspondence involving the Associate Director for Collection Development and the South & Southeast Asian Studies Bibliographer. Of particular note, quoting from one of UNTAC‘s letters to the UW, is the fact that the archive is “a complete history of not only the United Nations’ first peacekeeping radio station, but also of the UN-organized electorial process in Cambodia.”