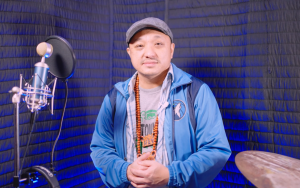 Tou SaiKo Lee is a Public Speaker, Hip Hop Artist, Storyteller, and Spoken Word Poet from St. Paul, Minnesota. He received a Liberal Arts B.A. with a minor in Creative Writing at Metropolitan State University (MN). Lee is currently a graduate student in the Southeast Asian Studies M.A. at UW Madison. His research is focused on “indigeneity” of Hmong identity in Southeast Asia and revitalization of Hmong culture and language through artistic approaches. He founded Street Stops and Mountain Tops which connects teaching artists and organizers from the U.S. to work with Hmong students in villages and orphanages of Southeast Asia. Lee received the Bush Foundation Leadership Fellowship in 2016 to focus on research of the Hmong diaspora including communities in Vietnam, Australia, China and Thailand of how Hmong use traditional arts as ways to preserve culture. He released his first Hmong language Hip Hop album titled Ntiaj Teb Koom Tes – Unified Worldwide Summer of 2021. Lee has developed an arts-based curriculum titled UCL Unified Creative Learning as an educational tool with his album for students to be engaged with Hmong cultural identity with The DIAL Group. Tou SaiK was selected to be a speaker by TEDx Minneapolis in 2021.  Lee’s talk titled “Reclaiming cultural identity and language through hip hop” can be found on YouTube.