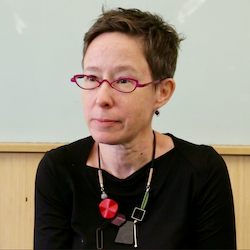 S faculty, has been awarded a Guggenheim fellowship for her project, Dictatorship on Trial in Thailand. She will use the year-long fellowship to analyze the individual, social, and legal impacts of the five years of dictatorship under the National Council for Peace and Order (NCPO, 2014-2019) in Thailand and identify how they might be redressed and justice forged. Unlike earlier dictatorships, the NCPO chose the courts as one of their primary sites of repression and the law as their weapon. Working with long-time legal and human rights colleagues, Tyrell will trace the modes of violence used by the junta, the ways in which victims were made vulnerable rather than protected by the law, and the practical and structural mechanisms through which perpetrators evaded accountability. Then, inspired by feminist court decision rewriting projects, she will revisit a series of cases in which the court adjudicated in favor of the coup and the abrogation of the people’s rights. By plotting alternative logics, interpretation of evidence and conclusions, she will outline what justice might look like and assess the depth of legal, social, and political transformation necessary to realize it. The project blends both empirical legal analysis of injustice with the imagination of justice. Before justice can emerge, it must be imaginable, and so she will use this project to create the legal and political analytic framework in which it is imaginable.

Tyrell Haberkorn is Professor of Southeast Asian Studies in the Department of Asian Languages and Cultures and is affiliated with the Center for Southeast Asian Studies. She researches and writes about state violence and dissident cultural politics in Thailand from the end of the absolute monarchy in 1932 until the present. She is the author of Revolution Interrupted: Farmers, Students, Law and Violence in Northern Thailand (University of Wisconsin Press, 2011), which rethinks the meaning of revolution in terms of legal rather than armed struggle, and In Plain Sight: Impunity and Human Rights in Thailand (University of Wisconsin Press, 2018), a new history of post-absolutist Thailand written through the lens of impunity. She also writes and translates about Southeast Asia for a public audience, including Dissent, Foreign Affairs, Mekong Review, Los Angeles Review of Books, and Prachatai. Her work has been funded by fellowships from Fulbright, the Australian Research Council, the Association for Asian Studies, the Radcliffe Institute for Advanced Study, and the Einstein Forum.